As the holidays approach, many of us are thinking about which plants would look best with our holiday décor. Here are some interesting facts about familiar traditions related to the plants we use during the holiday season.

-Ancient Romans were apparently the first to decorate their homes with evergreen cuttings, sometimes woven into wreathes. The tradition of bringing an entire tree indoors and decorating it began in the 16th century.

-It’s hard to find up-to-date statistics about the industry since so many tree farmers and sellers are small, local operations. The growing popularity of artificial trees is a constant concern, but 2014, the most recent year with solid reporting, set records, with 3,352 Christmas tree operations selling 19.9 million trees and generating $366.6 million in revenue.

-Christmas trees are grown in all 50 states. Oregon is by far the country’s leader, followed by North Carolina, Michigan, and Pennsylvania. 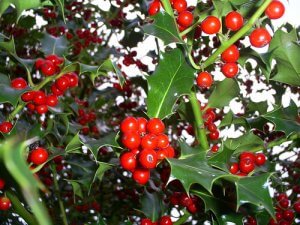 -The origins of this plant’s name are not clear. The most likely source appears to be the Proto-Indo-European word “qel,” meaning “prickly.”

-More than 500 types of holly trees appear in many shapes and sizes. In height alone, they range from 6 feet to 70 feet tall.  We usually think of holly as an evergreen, but some of those varieties lose and regrow leaves with the seasons.

-In some countries holly is thought to provide luck and protection to men in particular. Its association with its counterpart for women is the source of the English Christmas carol “The Holly and the Ivy.”

Mistletoe
-All parts of the plant are toxic to cats, dogs, and people, but not to other animals. One of the ways that mistletoe distributes seeds is through the digestive tracts of birds.

-The name is derived from two Anglo-Saxon words, “tan,” meaning twig or stick, and “mistel,” meaning, um, dung.  So when you’re with your sweetheart stealing a holiday smooch, try not to think about the origin of the plants name.

-The scientific name for American mistletoe is not much of an improvement. It’s Phoradendron, Greek for “thief of the tree.” Mistletoe is a parasite, diverting resources as its host tree mistakes invasive roots for its own branches.

Poinsettia
-Poinsettias are not native to the United States. They were brought here in 1828 by our first ambassador to Mexico, Joel Robert Poinsett of South Carolina.

-Red poinsettias are the most popular in America because of their association with the holidays, but there are more than 100 other varieties spanning a wide range of colors and patterns.

-Their brightly colored leaves are often mistaken for flowers. The flowers are actually the small yellow buds in the center.

-More than 34 million are sold in the U. S., each year, making it the best-selling potted plant in the country and accounting for almost 1/4 of all potted plant sales.

It’s not particularly remarkable that winter holiday traditions involve plants that thrive in cold weather. But some of these other facts were definitely a surprise to us. We hope you enjoy sharing them as you celebrate holidays filled with joy… and plants.